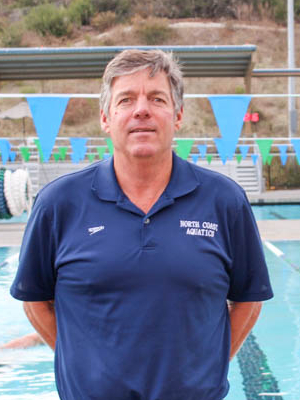 Head Coach and Team Owner Jeff Pease founded North Coast Aquatics in 1979 as the first coach owned swim club in San Diego and one of the first in the United States. During the last four decades, Jeff has established North Coast Aquatics (NCA) as the premier swim program in San Diego county and one of the strongest in the USA, being awarded Gold and Silver Medal status by USA Swimming.

Born in Toledo, Ohio, Jeff culminated a successful age group and high school swimming career with All American honors in two events. Jeff went on to Stanford U. on a swimming scholarship, graduating in 1975 with a BA in psychology. He later earned a teaching credential in Secondary Education from San Diego State U, and has done extensive graduate work in the fields of Sports Psychology and Exercise Physiology. 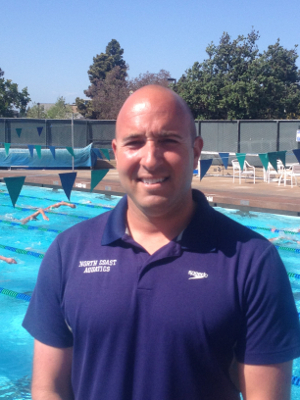 Mickey Murad began his current tenure with North Coast Aquatics in the fall of 2012. He swam competitively for Head Coach Jeff Pease in the late 1990’s as a middle distance freestyler, butterflier, and backstroker. During his high school career, Mickey was named an All-American, became a three-time Jr. National champion. In 1998, he earned a full scholarship to Cal-Berkeley swimming under legendary coaches, Nort Thorton and Mike Bottom. During Mickey’s time at Cal, he became one of the premier middle-distance freestylers in the country and held world ranking. He was an All-American and multi-time US National Finals.

Mickey was named San Diego Age Group Coach of the Year on 2012. He was a member of the Western Zone staff in 2012 and Head Coach for San Diego-Imperial All-Star team in 2013. In 2012, Mickey was selected as one of six coaches nationwide to join the American Swimming Coaches Association Fellows class, a program designed to mentor “up-and-coming” coaches. He was selected as manager of the Zone Select camp and National Select Camp at Colorado Springs in 2014. In 2015 Mickey managed the National Junior Team at the Olympic Training Center. He was team manager of the 2016 U.S. Junior Pan Pacific Team in Maui, a team consisting of the nations top 18&U swimmers.

Growing up in San Diego, Mickey enjoys anything involving the ocean. He has three siblings that all swam for North Coast Aquatics, both sisters swimming at UC Santa Barbara. Mickey’s parents were active members of the NCA board, his father helping establish the Kay Pentz scholarship fund in 1997. 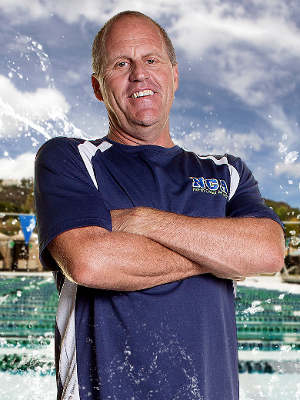 Rob Mackle was a Michigan High School State Champion in Swimming and played high school football. Rob was four year Letterman and Team Captain at Indiana University, under legendary coach “Doc” Councilman. He was a Senior National and NCAA qualifier in the freestyles. Rob completed for team USA in 2 world triathlon championships, and was a top finisher in the Hawaii Ironman. Rob has 20 years of experience coaching youth sports, swimming and football. He enjoys using a positive attitude and good energy at the pool to teach kids to work hard and have fun. Rob is a business owner of StartBuild.com and has been married to Patty for 24+ years. Patty is a former age group swimmer with NCA, and college swimmer at University of Hawaii. Patty is a swim coach with La Costa Canyon High School. Rob and Patty have 3 active children. Mickey a Cal-Poly Graduate in Engineering, and 4-year swimmer. Katlin a Long Beach State Student and water polo player. Duke, a Student and football player at Linfield College. 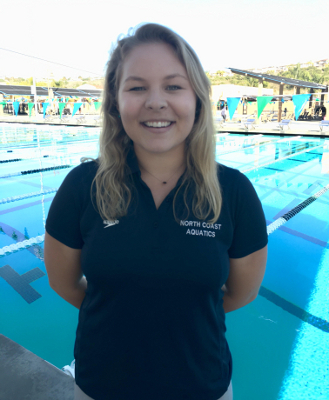 Eva began swimming at 6 years old in Los Angeles and then moved to San Diego and joined NCA, swimming there from 2004-2012. She attended Torrey Pines High School from 2008-2012 where she was a four-year letter-winner and one-year team captain, Named team MVP her senior year. Eva attended Northern Arizona University from 2012-2016 where she was part of a 3-time Western Athletic Conference (WAC) winning team, top 24 scorer each year, major in criminology and criminal justice with a minor in international relations. Eva is a four-time WAC All-Academic selection and Golden Eagle Scholar-Athlete Award recipient. She specialized in distance free, fly and IM (200 fly, 500 free and 400 IM).
Eva began her coaching career as a summer intern with NCA at JCC & Alga Norte in 2014-2016, joining the staff full time in September 2016 as 11-14 lead, 10&U 5day lead and 11-12 & 13-14 assistant. 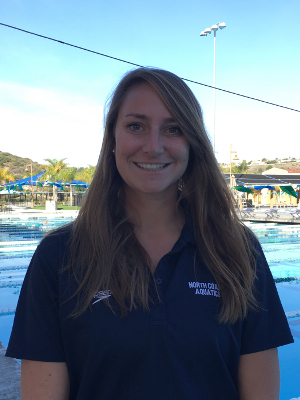 Kristyn was born and raised in Bend, OR where she was constantly active in all kinds of sports from golfing to skiing to wakeboarding, but her passion ended up being swimming. Swimming 10+ years with the Bend Swim Club, under Mark Bernett, Kristyn was ranked as one of the top swimmers for the state of Oregon in multiple events throughout her club career. She swam at the national level, winning multiple state and sectional championship titles, and still holds the records in the 200 Back and 400 IM for BSC. She was also, one of 16 swimmers in Oregon to be selected to train at the Olympic Training Center in Colorado. Kristyn came to San Diego where she earned an athletic scholarship to swim for the University of San Diego (USD) Torreros for all 4 years. She broke the 100 & 200 backstroke records her Freshman year, continuing to set these records throughout her college career. She is excited to have been with NCA for the last 3 years. coaching all the different age groups throughout those years, but has taken the lead with Senior 2. She's excited to continue to coach up each swimmer and be a part of the NCA family! 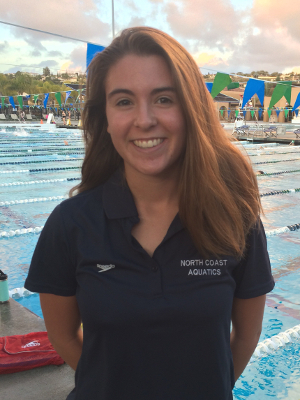 Violet started her competitive swim career at the age of 8 under the Magdalena Ecke YMCA Riptides in Encinitas, Ca. By the age of 14 she moved to NCA, and continued swimming under Coach Mickey Murad and Coach Kristyn Deckard until she graduated out of Senior 2 program. During her high school career at San Marcos she competed at the CIF championship all four years, and during her senior year, as captain, she helped the girl's swim team achieve their first Avocado East League Championship title. After graduating, Violet started working as an assistant coach for the age group program in the summer of 2017. Violet is also currently swimming at Palomar College. 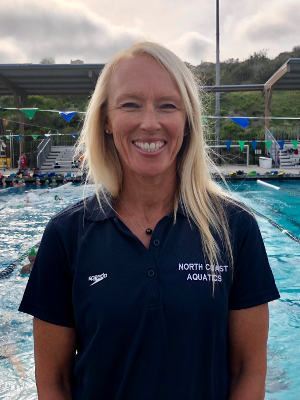 Swimming has been a part of my life since a very young age. I began swimming lessons at a very early age due to my love for the water. I was on my first swim team (Carmel Barracudas) by the age of 5 where I swam summer league until the age of 9 when I moved to a more competitive, year round swim club (Monterey Bay Swim Club). I was a successful swimmer (breaststroker) through the age of 12. My last swim meet was Far Westerns and then sadly I told my coach I was going to quit swimming due to my heart not being fully committed to the sport anymore. I was a product of being exposed to many other sports and dedicated to put my heart into playing tennis and field hockey throughout my remaining middle/high school years. The best part of this/my story is I came back to swimming in my first year at University of California San Diego.I was a "walk on" and lucky for me (and a lot of uncomfortable retraining) I was accepted. This for me was the best thing I ever did for myself athletically and it catapulted me to further my athletic career as an adult in open water swimming as well as triathlon. I will never leave the sport again.

I have had a long coaching relationship with NCA. I founded the JCC Barracuda Novice swim team as a feeder program for NCA while I was attending graduate school at San Diego State University. After securing my Masters in Public Health, I decided to dedicate myself to coaching full time and worked at the JCC for 16 years until the end of 2007. I then moved to New Zealand where I coached 13 and older swimmers at North Shore Swimming Club This was an awesome learning experience to not only work with older, high level swimmers but to understand that swimming has an universal goal... make swimming a lifelong sport. I came back to the water two years ago when I began teaching again (at a more basic/instructional level) at WaterWise Swim School as well as filling in for NCA coaches until I was hired this past October to lead the 10/under 3 Day Group as well as assist the 10/under 5 Day Group. This is definitely my favorite age to coach and where I have the most expertise and experience. I am loving every day of it! 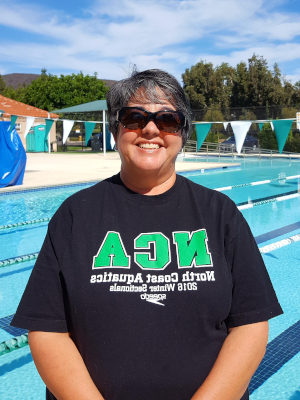 I enjoyed playing water polo and swimming through college. I began teaching swimming as a way to finance my college expenses 35 years ago. I began coaching as a volunteer coach for Mt. Carmel High School. This led to a 4 year stint coaching for Mt. Carmel JV boys and girls team as well as an assistant and head coach positions for PQ Aquatics. I have coached all levels of swimmers since then: 10-U to Master Swimmers (Adults). I have been a part of NCA since 2010. I am also a professional educator starting my 29th year of teaching middle school in Escondido.

I am involved in the USA swim officials community. I recently became certified to officiate at national swim events that includes the Olympic Trials as a Stroke and Turn judge. You may see me as an Administrative Official verifying swim times at a swim meet as well as organizing meet entries for the team. I have had the opportunity to officiate at NCAA college meets as a Stroke and Turn judge for the past 2 years.

My son is a former NCA swimmer who hopes to swim his senior year of college at the University of La Verne and graduate in Spring of 2021. I bring this up because I have traveled the age group swim journey as a coach and parent. Get ready for a great ride of being a swim family. 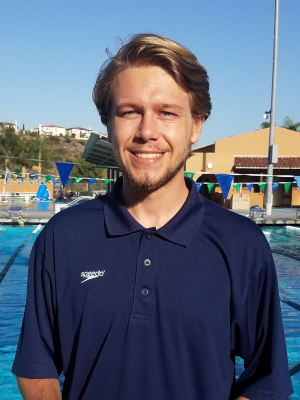 Ethan Attebury joined the NCA coaching staff this Fall after working as an intern this summer with our age group program at Alga Norte. Ethan is a 2016 graduate of Vista HS where he swam and played water polo for his high school. Ethan is starting his 3nrd year of college, attending Palomar College. Ethan came to NCA after teaching lessons and coaching a novice team at Waterworks Aquatics in Carlsbad. After sending many of his students to NCA, Ethan wanted to take his coaching to a higher more competitive level and has been a great addition to our NCA coaching family. Ethan brings a sound understanding of stroke mechanics and an enthusiasm to the pool deck. NCA is excited to be have Ethan on our coaching staff!